A well-known issue with the use of antibiotics is that low levels of these antibiotics inevitably leak into wastewater and the environment. This not only contaminates water and food, but also reduces the antibiotics efficiency in the long term as it exposes bacteria to a low dose, causing antibiotic resistance. In a recent publication and one of the most read papers in Biomacromolecules in March, Hongjun Liang et al. of Texas Tech University Health Science Center presented a nano-antibiotic which consists of a cellulose backbone adorned with hydrophilic polymer brushes. In the body the bottle-brush polymer acts as a potent killer for bacteria, but once it is released into the environment, it is readily decomposed. As shown in the below figure, the polymer backbone is cut up into smaller, harmless pieces. Cellulase – an enzyme abundant in nature but not in the human body – breaks the backbone down to harmless fragments. 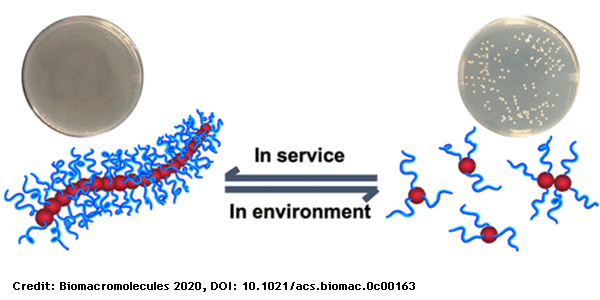 The team at TTU used small-angle X-ray Scattering (SAXS) on model liposomes mimicking either mammalian cells or bacteria cells to test the activity and selectivity of their bottle-brush polymers. They found that mammalian cell-like liposomes co-assembled with the polymers to form liposomes similar to the original liposome. In addition, liposomes loaded with a fluorescent die did not show any leakage, indicating that the polymers are not disrupting the mammalian cell membrane. Bacteria cell-like liposomes on the contrary, were shown to assemble into a 2D hexagonal phase when treated with the bottle brush polymer. 3D cubic phases were formed when they were treated with either the disassembled bottle brush or the side chains only. In another essay the authors showed that only the bottle-brush polymer acts as a membrane-active nano–antibiotic that kills bacteria. Therefore, they reason that although all three compounds (the bottle brush polymer, the disassembled polymer and the side chains alone) disrupt the bacteria membrane, only remodeling into the 2D hexagonal phase is irreversible and kills the bacteria.

Read more articles from our Eye on Publications section

Have a look at other customer publications

This website uses cookies to improve your experience while you navigate through the website. Out of these, the cookies that are categorized as necessary are stored on your browser as they are essential for the working of basic functionalities of the website. We also use third-party cookies that help us analyze and understand how you use this website. These cookies will be stored in your browser only with your consent. You also have the option to opt-out of these cookies. But opting out of some of these cookies may affect your browsing experience.
Necessary Always Enabled
Necessary cookies are absolutely essential for the website to function properly. This category only includes cookies that ensures basic functionalities and security features of the website. These cookies do not store any personal information.
Non-necessary
Any cookies that may not be particularly necessary for the website to function and is used specifically to collect user personal data via analytics, ads, other embedded contents are termed as non-necessary cookies. It is mandatory to procure user consent prior to running these cookies on your website.
SAVE & ACCEPT